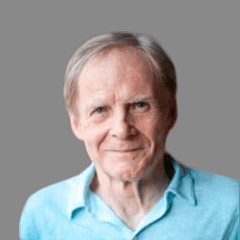 Roger HB Davies is the Founder and CEO of McLuhan & Davies (MDC) and Think on Your Feet International. After a successful career as a business journalist, editor, and publisher, and winning numerous national and international awards, Roger Davies co-founded MDC with Dr Keith Spicer and Eric McLuhan, some of the best pioneering minds in media and communication.

Roger was instrumental in creating successful communications workshops like Think on Your Feet® which is the flagship of McLuhan & Davies. Today, MDC delivers its workshops in more than 30 countries. Their Think on Your Feet® workshop has already been translated into nine languages. Constantly re-inventing and adapting to the changing business world, Roger and his team at MDC develop new tools and successful workshops like Writing Dynamics™, The Skilled Presenter™ and Grammar on the Rocks.™

Roger HB Davies and his team at MDC prxovide their subject matter expertise to OCI to advise on effective ways of business communication as well as conduct communication-skills training to help professionals in their long-term success.

Roger believes that:
“Matching your message to your audience is key to improving your communication game.”